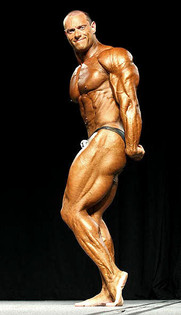 Although the general gist of this page has not changed, I thought that it was time to update things a bit to tell you what has been going on in recent months.

It seems almost unbelievable but I have now been involved in Bodybuilding for over 25 years. As a competitor and as a gym owner, I have built up a store of knowledge on exercise systems, diet, nutrition and pre-contest preparation which I am now passing on to the next generation of competitors. In my time, I have competed at all levels from Junior and Novice to IFBB Professional. Here are some of my contest results.

Here in The Forest Gym, although some of our top competitors have retired from the arduous life of 24/7/52 Bodybuilding and Power Lifting competitions and moved on to other things, we still have many young — and not so young — men and women ready to give it their best shot and aim for the top. As you will know, 2006 was a great year for the gym with Troy Brown and Michelle Jones winning the Overall titles at the UKBFF Finals in Nottingham, the first time — and, so far, the only time — that the two Overall winners have come from the same gym. Troy Brown had another great year in 2007, placing 6th in only his second Pro Show — the Spanish IFBB GP in Santa Susanna. Troy looked terrific and well deserved his placing as he beat other Brits Mike Sheridan, Lee Powell and Hunni Glanville as well as other seasoned Pros. Since 2007, Troy has been building a new life in Canada but, in spite of an initial enthusiasm for further competition — we had some great shots revealing his continued progress — he has now decided to retire from contests and to concentrate on his long-term plans for life in his new country.

At the UKBFF Finals in 2010, we came within a whisker of another double Overall win. Alvin Small looked really impressive in winning the SHW Class and the Men's Overall. Rene Campbell came in 2nd in the Women's Bodybuilding and she was unlucky not to take the top spot. She rectified that in 2011, when she was a convincing winner. Since then she has continued to improve and the quality of her physique has become obvious to all who have seen her on stage. Her efforts culminated in success at the IFBB World Championships in Bialystok, Poland on 6th/7th October 2012, where she shocked everyone with her size and condition as an impressive winner in the Women's Bodybuilding HW Class. She then went on to take the Overall title to become the Best Amateur in the World and to be given her Pro Card.﻿

Also at the UKBFF Finals in 2011, we had other successes in the Men's Classes with several competitors in the top ten. In the SHW Class we had Aliy Aljaff and Stuart Core in the top five and I predict one or both of these men will eventually win the top spot. Many years ago, Stuart won the NABBA Junior Mr Universe and the great potential he showed then has still to be fully realised.

Everyone who makes it into the IFBB Pro ranks will find that it is both arduous and expensive. Competing at this level requires a 100% commitment, a lot of hard work and also, a lot of money. It is not just the cost of preparation but with almost all contests in recent years being in the USA, travelling to and from events and staying for several days in hotels does run up the bills. Of course, everyone needs some sponsorships and I was helped considerably by Kerry Kayes and CNP Professional. However, I decided to take some time off from serious training for a while to let my body and bank balance recuperate. I had a number of on-going, niggling injuries but I am glad to say that these have mostly been overcome. During the time that I have been taking things easy on the competition front, I have become more involved with other things and I seem to be busier than ever. I have kept the idea of competing on the back burner and I may yet walk on stage again. I am enjoying my training and regaining some of my lost size and strength. But to compete at top level requires a highly focused, concentrated effort and at the present time I am not able to do that.

In addition to the day-to-day running of The Forest Gym, I have been coaching top level Bodybuilders from all over the UK. You will see from the competition results that my time has not been wasted but I am having to cut back on this work and on the numbers of competitors I am able to help because there just are not enough hours in the days and weeks to fit everything in. I need to sleep at nights. Our gym has a string of competitors lined up for contests in 2013 and you will see them on stage in the coming months. The first event was Paul Smith's UKBFF South Coast contest on Sunday 28th April — which is reported on other pages.

I want to personally invite you to come along to The Forest Gym to get started on a programmed designed to get you into better shape — or into top shape, even. You know that you will never regret it. I am no longer able to coach large numbers of people at a distance via e-mail, letter and telephone conversations but if you can make it to our gym, you will get the advantages of training in a long established gym with a great atmosphere and a lot of expertise.