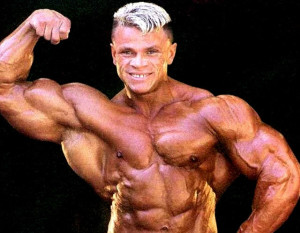 Do you remember the freaky Polish-German Bodybuilder Roland Cziurlok? He has been hidden away but this coming week-end he will be competing in the IFBB Pro World Masters Championships in Miami Beach, Florida.

We wish him good luck on his return to competition. 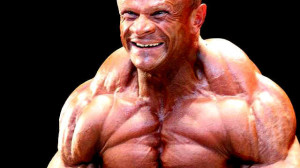 We have an update on the above. The contest was won by Dexter Jackson beating big Toney Freeman into 2nd place. There were many former Pros competing including former 1983 Mr Olympia Samir Bannout. Roland Cziurlok came in a respectable 8th. He is now 44 years old and has been out of competitions for ten years. He hasn't got quite the freaky appearance of old but he looks better than many at his age. The contest included many old Pros like Troy Alvez, Darrem Charles, Pavol Jablonicky, Lee Apperson and Andreas Cahling. Will he keep up his renewed enthusiasm for competition or will he lapse back into retirement?

The situation is now to change. The British government has decided to “restrict importation of anabolic steroids for self administration to personal custody.” This means that importation even for personal use will become a criminal offence. The government has acted on the recommendations of the Advisory Council on the Misuse of Drugs [ACMD]. This means that users importing will have to do so by visiting the country of origin, buying their products and bringing them in personally. However, possession of steroids produced by an underground lab and for personal use only will no longer be an offence.

What effect will this have? The most likely effect will be a big increase in the range of products made by underground labs in the UK. This will result in a general down-grading in the quality of products on the streets.

With the Olympic Games in London next year there has been pressure on the government to make mere possession also an offence but, so far they have resisted such pressure.  WADA is not happy with the attitude of various British governments and will continue to apply pressure to make any kind of possession an offence.  Next year will be the critical period.

How it will all work out is difficult to say when HM R & C and the Border Agency have been singularly unsuccessful in regulating the flow of recreational drugs into this country. 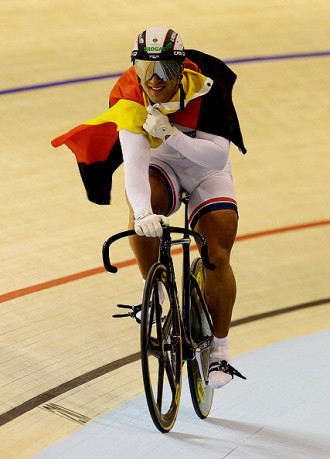 As I was looking around the internet, I came across this picture of German track cyclist Robert Forstemann at last year's UCI World Championships in Copenhagen. He is carrying the German flag after his team won the Men's Team Sprint. Hasn't he got awesome legs? The sprinters in bike riding do have massive legs but these are exceptional. His bike looks too small and that seat can't be comfortable. Freaky.

Time to dump the car and ride a bike? 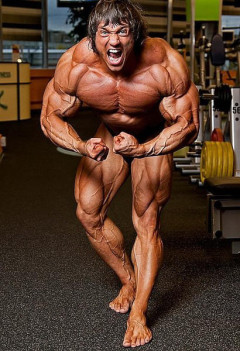 I recently stumbled across pictures of a new Russian freak. This is 22year old Andrei Skoromnyi. His physique is extraordinary for someone so young. Beyond the pictures, I know very little about him. It is said that he trains at the same gym as that other young Russian freak, Alexei Lesukov. Whether we will ever see either of these young men in the west, I know not, but they certainly have enormous potential to challenge the best in the world.