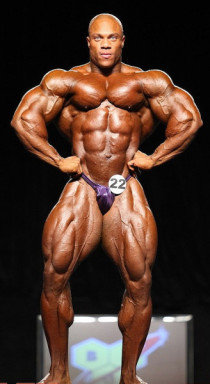 In the 202 Class, Kevin English — who is an American — was the winner, with James “Flex” Lewis 2nd. Shaun Tavenier was 5th but the third British competitor James Llewellyn was unplaced. 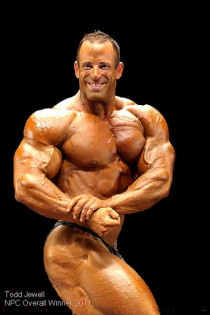 Todd Jewell was the winner in the USA of the SHW division of the 2011 NPC Nationals held on 18th/19th November. He is a big man 6ft 2in tall and weighing in at 20 st, with lots of mass, depth and separation. In spite of his huge size he has a classic shape — including a small waist — with no weaknesses. The standard of physique at this show was very high but from the pictures, Todd looks to be a deserving winner. He went on to take the Overall title as well.

We first heard of Todd Jewell in July 2009, when he went into a bank in his home city of Seattle just before a gun man came in and proceeded to hold-up the bank. Todd took umbrage at this and went for the guy, disarming him, twisting his arm — breaking it in the process — and then slamming him onto the ground. Todd held him face down and planted his knee in the guy's back, breaking two ribs. With the help of a couple of other customers they hung onto the man until the cops arrived. It turned out that the same man had held up seven other banks in the Seattle area within the previous month. Todd was in all the local papers and, for once, bodybuilding got some good publicity.

If he had done this in England he would probably have been done for assault. In America he got lots of praise and a reward.