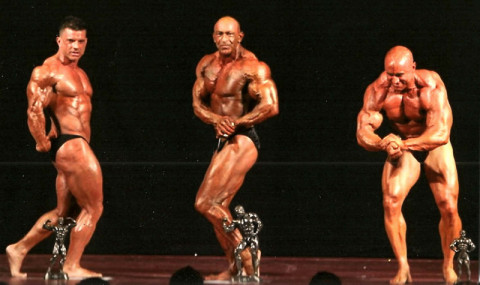 In the Masters O40 Class, we had Alfie Noda and Ian Denman, again both from The Forest Gym. Alfie qualified via a 2nd place at the North East Championships in Leeds on 2nd October and was ready for the Finals three weeks later. Alfie is a very experienced competitor with much success in the U80Kg Class. This year he showed himself getting nearer to his form of old. He has always had great symmetry and with full muscles and sharp condition he achieved a well-deserved 3rd place.  Ian Denman qualified also in the Masters O40 Class; in his case via a 1st place in the Masters O40 at the West Midlands Show at the new venue of the Civic Hall, Bedworth. He made the top ten but not the top six. This was disappointing when he was on stage with such great condition, shape and balance. He had put a lot of effort and commitment into preparing for this show. There were those at the show who thought he should have placed higher and it must have been a close run thing.

In the Master O50, Harold had Bob Dawson. He was very lean and dry particularly on the first day. He made it to the top ten but on the Sunday he was slightly softer; he had lost that critical sharpness and this probably cost him a place in the top six.

In the U100Kg Class, Serwan Aljaff came 2nd behind an impressive Chris Jones. Serwan has great shape and symmetry and he displays his physique well in his posing routine. To win this class convincingly, he just needs a bit more mass — and he should manage that in the next 12 months. Also in this class and making the top ten was Wayne Niemick. Wayne has lots of experience now and he is still getting better — I remember him as a junior. He has a terrific shape, great presentation and condition. But to get to the top he needs more thickness in the chest and back. This will mean that he competes as a super heavyweight. I think that he needs to take that decision and then get down to some hard graft. His shape and condition will take him a long way. 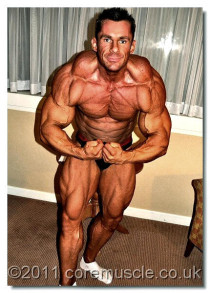 Finally, we come to the O 100 Kg Class — the really big boys. There was some really high quality muscle on display here and there was no over-night sensation. All the guys in the top six have been working hard for years to get to the size and condition they brought to this show. As we said, it was a win for the terrific Cecil Croasdale and he was pushed all the way by Dave Titterton. Big H has been helping Ally Aljaff for some time now and he is still a man with a great future. At this show, he had not got quite the crispness that he displayed in coming 3rd last year. Today he only made 5th and that must be a disappointment. I have seen Ally in The Forest Gym quite a few times now and he always looks really impressive. He needs to gain a few more kgs of muscle and keep his fantastic shape, separation and all-round condition. Then he will be unstoppable. Taking over 3rd place this year was Stuart Core. He comes all the way from the deepest West Country in Plymouth to see Harold. Stuart is a man who has been on the scene for some years. Today, he weighed in at 18st 4lbs [116 kgs] and in his best ever condition. He has almost everything; great size, symmetry, density and presentation. He just needs a bit more on the legs and to improve his condition slightly and he will win this class — and probably the Overall as well. Again, I have seen Stuart on stage many times over the years and it's time he achieved his full potential. With his current commitment and Harold's help he will go to the top